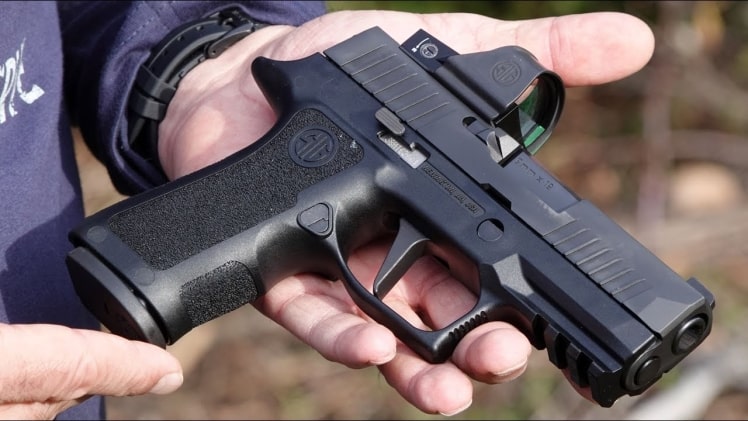 If you’re a fan of Sig Sauer hardware, then you’re already likely to know all about the qualities of their hugely popular P320. However, what you might not understand is why you should consider investing your hard-earned cash on a Sig Sauer P320 X-Compact RXP 9MM.

Well, the truth of the matter is that it’s a handgun that comes with all of the benefits and features of the P320, but with a real emphasis on making it one of the best concealed carry weapons around. Offering the same durability and accuracy of a duty pistol, it’s sure to be a popular choice in the years to come.

The X Line Series of Guns

When creating this latest addition to the X line series of handguns, the Sig Sauer designers were attempting to create a weapon that was able to carry the amount of rounds that people were looking for, but that also offered the same custom feel – the result is the Sig Sauer P320 X-Compact RXP 9MM.

The handgun allows for a higher speed of use, as well as increased accuracy, partly due to being optics-ready and possessing a nice flat trigger. Simply put, this gun was created to be ideal for concealed carry, right out of the box, while also offering the same X Line optimal performance.

While there are many gun users across America that don’t want a red dot on their carry guns, what can’t be forgotten is the great strides that have been made in red dot technology over recent years. The Sig Sauer P320 X-Compact RXP 9MM has a removable sight plate, as well as being pre-drilled for the Romeo 1 Pro sight.

The truth is that gun manufacturers like Sig Sauer are responsible for some of the best sights in the world right now, which means that you get a handgun that features a proprietary sight, rather than one from a 3rd party company. The result is a combination that allows you to shoot faster and more accurately, meaning you’re better able to protect yourself and your family.

A Few Design Changes From the Standard P320

In their quest to create the perfect concealed carry handgun, the Sig Sauer team has also made a few design changes to assist in smooth extraction and the ability to truly conceal it on your person. To begin with, there’s a slightly adjusted X series grip – now more rounded, with a higher beaver tail.

Also, the RXP has a fast back on the rear of the beaver tail, so that it’s much less likely to protrude and show through your clothes.

Whichever way you look at it, it seems very much like the Sig Sauer P320 X-Compact RXP 9MM achieves the objectives set out by the manufacturer – and we’ve not even explored the fact that it’s flat trigger offers the same consistent press whether you have a low, medium or high trigger finger.

This is a next level concealed carry handgun that makes it easier and quicker to hit the target and defend yourself when it really matters. That alone makes it worth consideration.